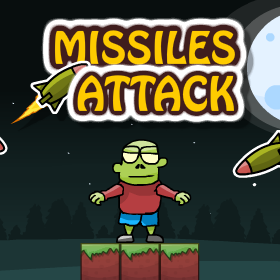 Missiles Attack is one the best zombie games you can play free online. But, if you prefer more games for girls, give our other zombie games a try.

It's that's time again on Iupy.com, the time to eliminate the monster threat, when you play Missiles Attack and get rid of all the monsters that appear in the level. And because these monsters are very powerful, only rockets are able to destroy them, and give you the peace of mind that they won't be bothering you ever again. But you have to aim all that firepower, and to do that you have to select from which side of the screen you want to launch your projectiles. This may sound easy, but when obstacles start appearing and acting as shields between the weapons and the zombies, you'll have to think twice before firing.

But you should welcome the increased challenge, because with more challenge you can expect more fun, especially after you figure out how to overcome the current obstacle. The moments where you watch the rockets fly towards their target can be especially exhilarating when you are not sure if they can hit the monsters or not, especially in the later levels, where timing becomes more important, while you have to correctly judge when is the best time to shoot, so that the projectiles don't hit any of the ladders. And because each level has a scoring system implemented into it, you'll see yourself chasing after as many stars as you can get.

Eliminate the monster threat when you play Missiles Attack on Iupy.com.

Thank you for your feedback and for helping us improve Iupy.com!